Note from Alanda Craft.  Barbara’s lovely flannel Christmas  quilt is made from a Layer cake that she picked up in New Mexico. I love this fabric and the quilt pattern is simple but striking.  The beauty of layer cake squares is that they are large enough to showcase a pattern. as Barbara has done in this quilt.  She has used a combination of large squares with some 4 patch squares and it looks lovely.

She makes pet beds from her left over scraps, for her local pet shelter, and these are much appreciated by the staff.  So let’s take a look at Barbara’s latest Christmas Quilt made using a flannel layer cake.

Barbara Says
I got a stack layer cake pieces in New Mexico last Christmas. I didn’t want to cut them up and lose the bears so just used them as they were, except for a few that I cut up into 4 patch squares.
I used Christmas trees on the back.
I had Rolayne use Christmas trees for the stitch pattern
I had enough to make a decent sized mat for a pet bed. I didn’t have big pieces left so just cut what I had into strips.
When I look at it now, I wish I had arranged the strips differently.

I like how Barbara has done the borders on this quilt. The green border makes the centre of the quilt pop while making a nice separation to the red floral outer border . Layer cakes are such a versatile size to use in quilts, whether you just sew them together as squares or break them up with 2 patch squares as Barbara had done.  If you don’t have a layer cake on hand  but have fabric that you would like to use, we have a tutorial on how to cut layer cake squares from yardage or meterage. 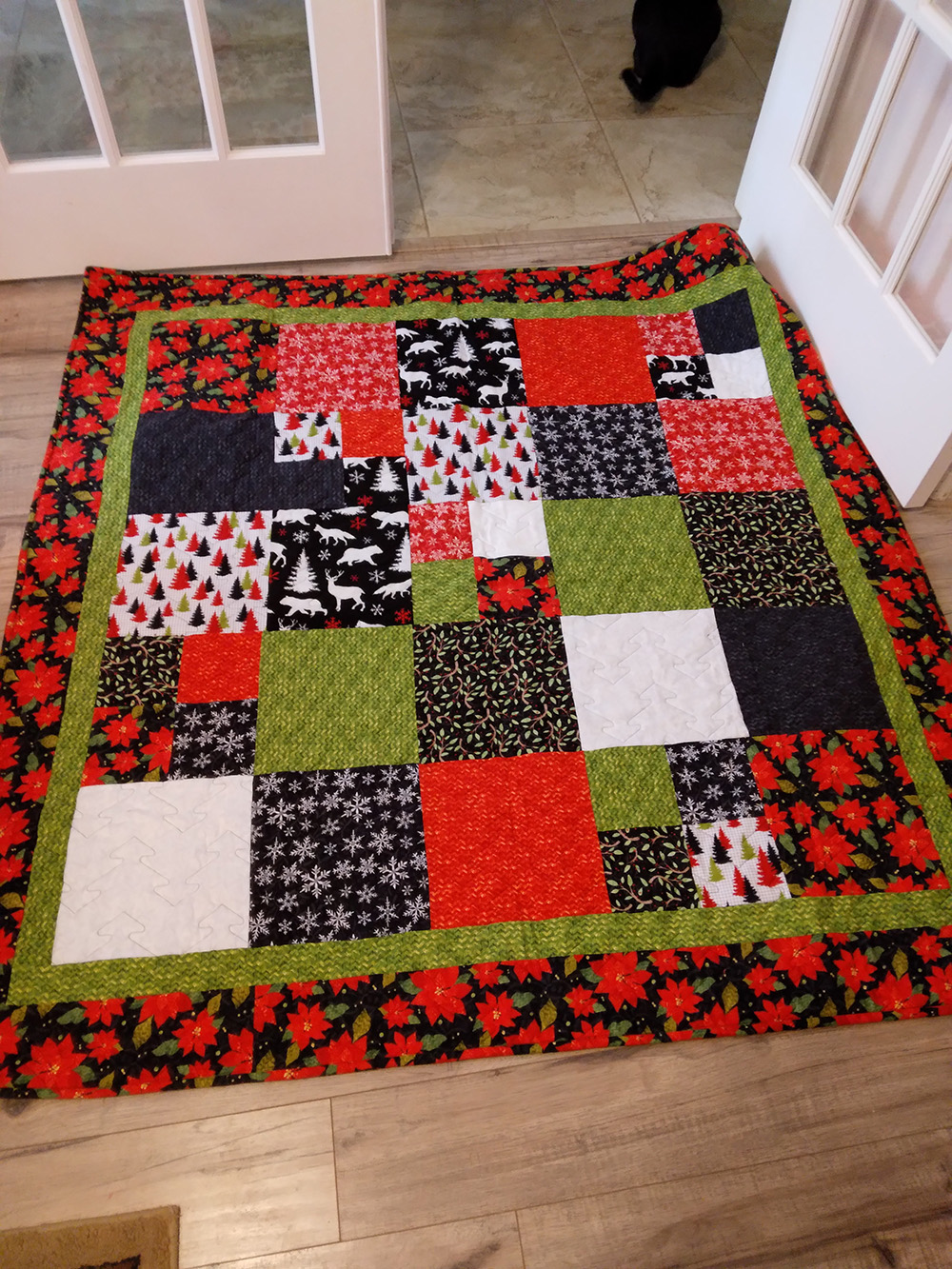 Doesn’t the Christmas Tree fabric backing really set of the quilt front.  Being part of the same range it matches perfectly

In the past we have been guilty of just buying a piece of fabric because it’s pretty, but later when you try to match it with a backing fabric it leads to all kinds of trauma. Nothing ever goes with it.  Barbara has made sure that she didn’t have that problem by buying the matching fabric at the time. Certainly makes life much easier when putting the quilt together. 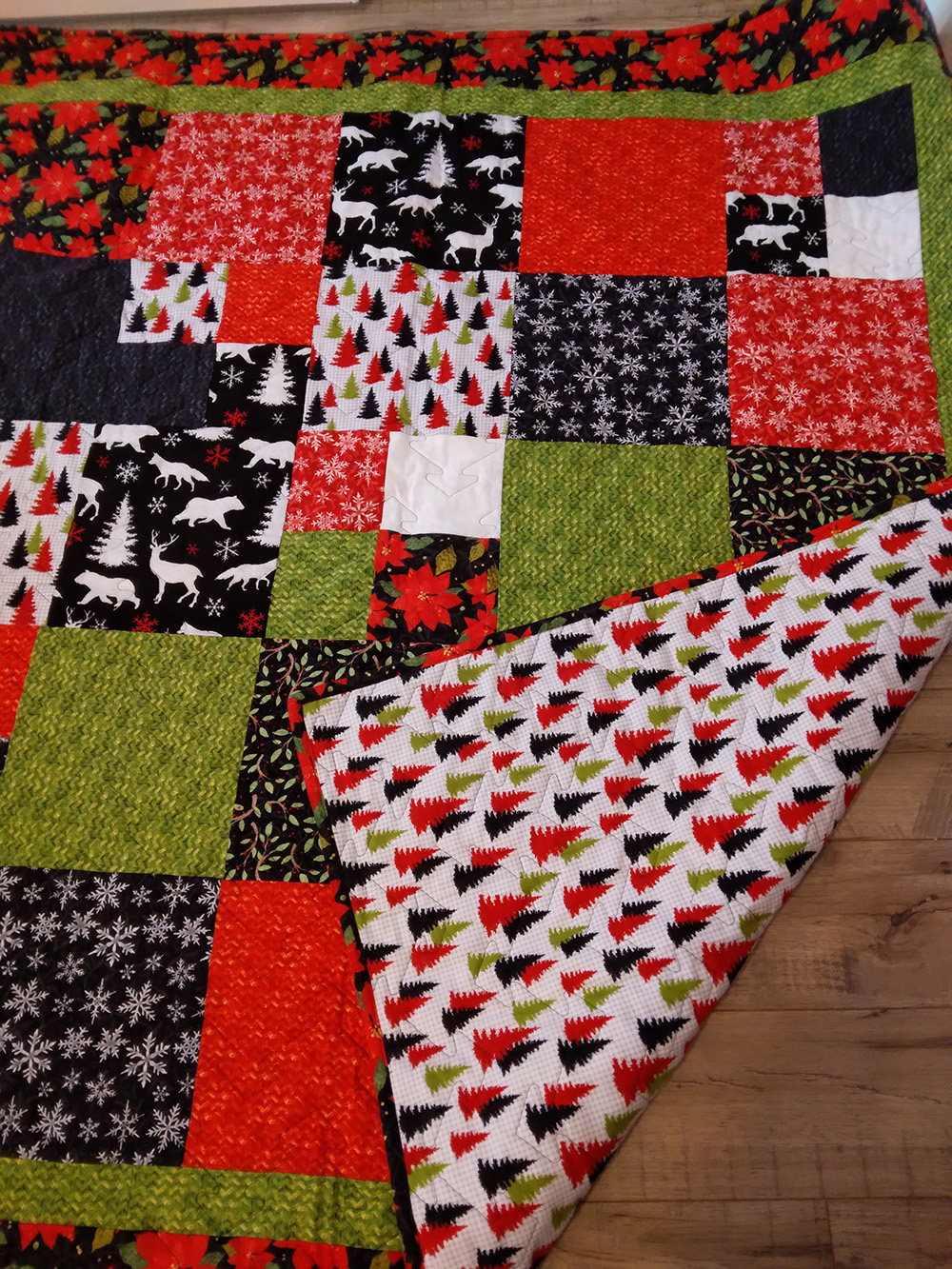 Barbara had Rolayne  from the Clover Patch Store  quilt the layers together using a Christmas tree design which sets the quilt off perfectly. 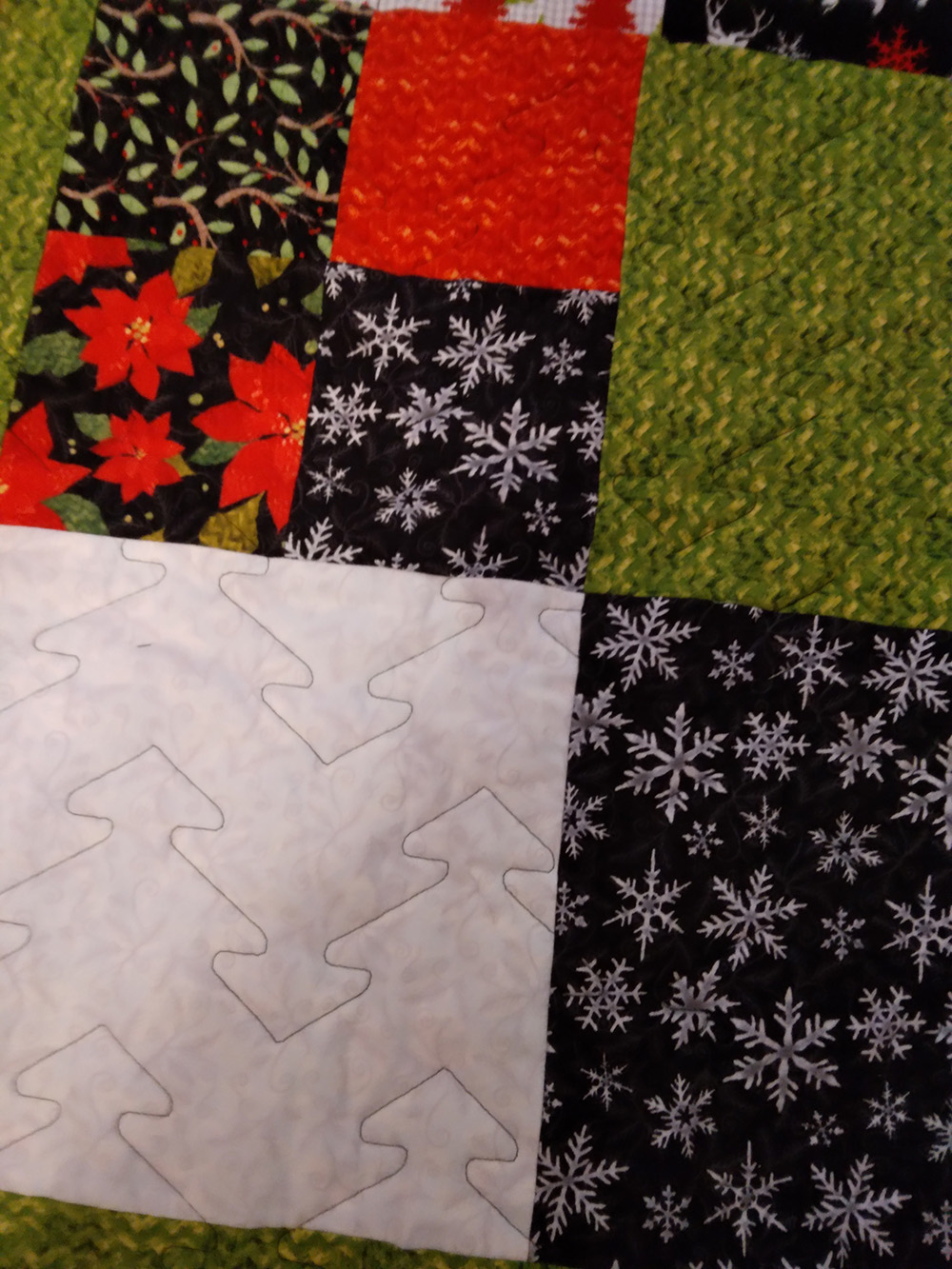 And here is the pet bed made from leftover strips. A quilter never wastes anything.

Barbara makes these pet beds for her local Rescue Shelter. She has been making these for years now and the shelter is very appreciative of them. 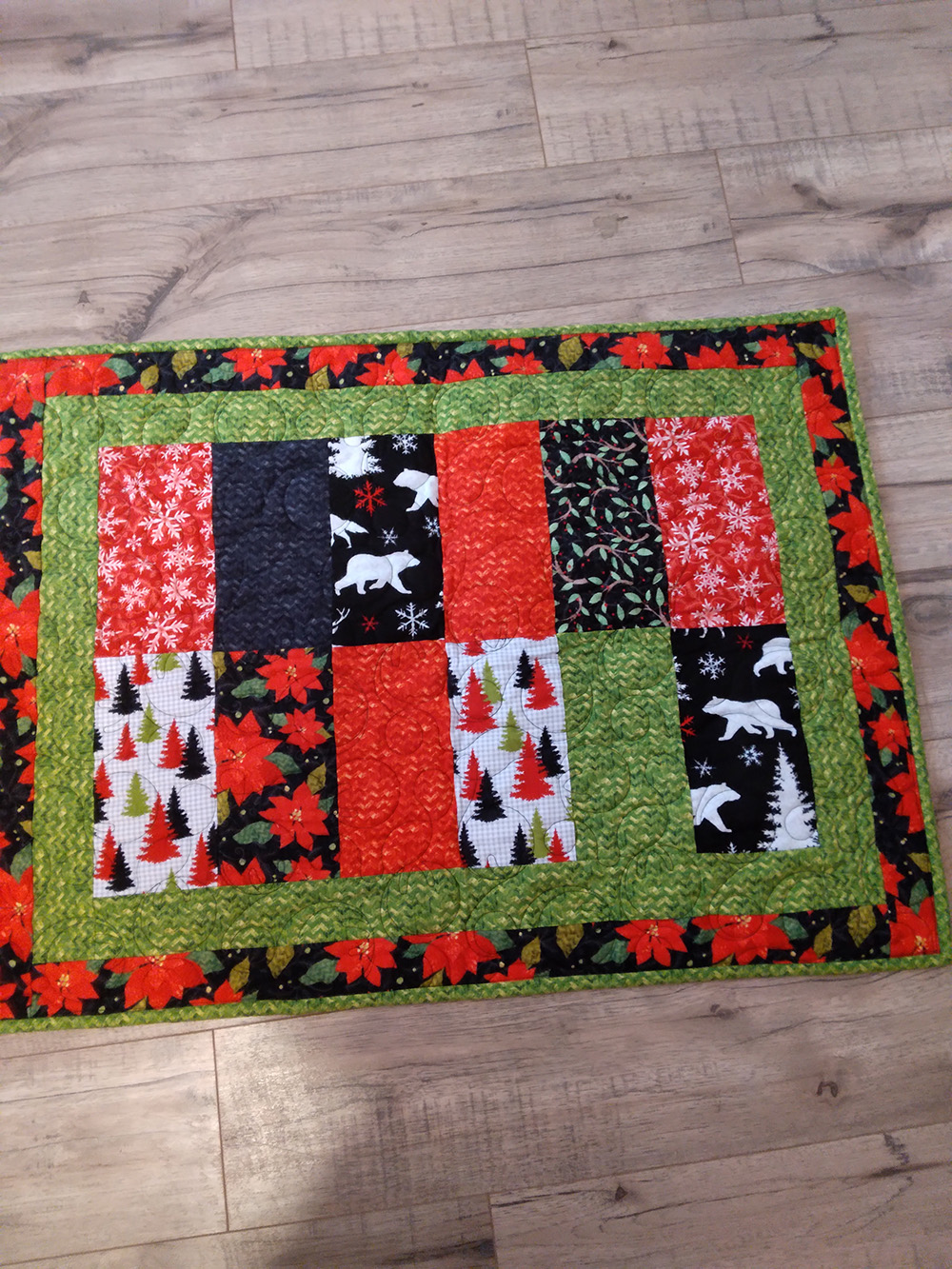 The backing on the pet bed different from the large quilt and it ties in very nicely with the front of the quilt.
As Barbara says – It’s fairly heavy and I think it will be nice and warm in the winter. 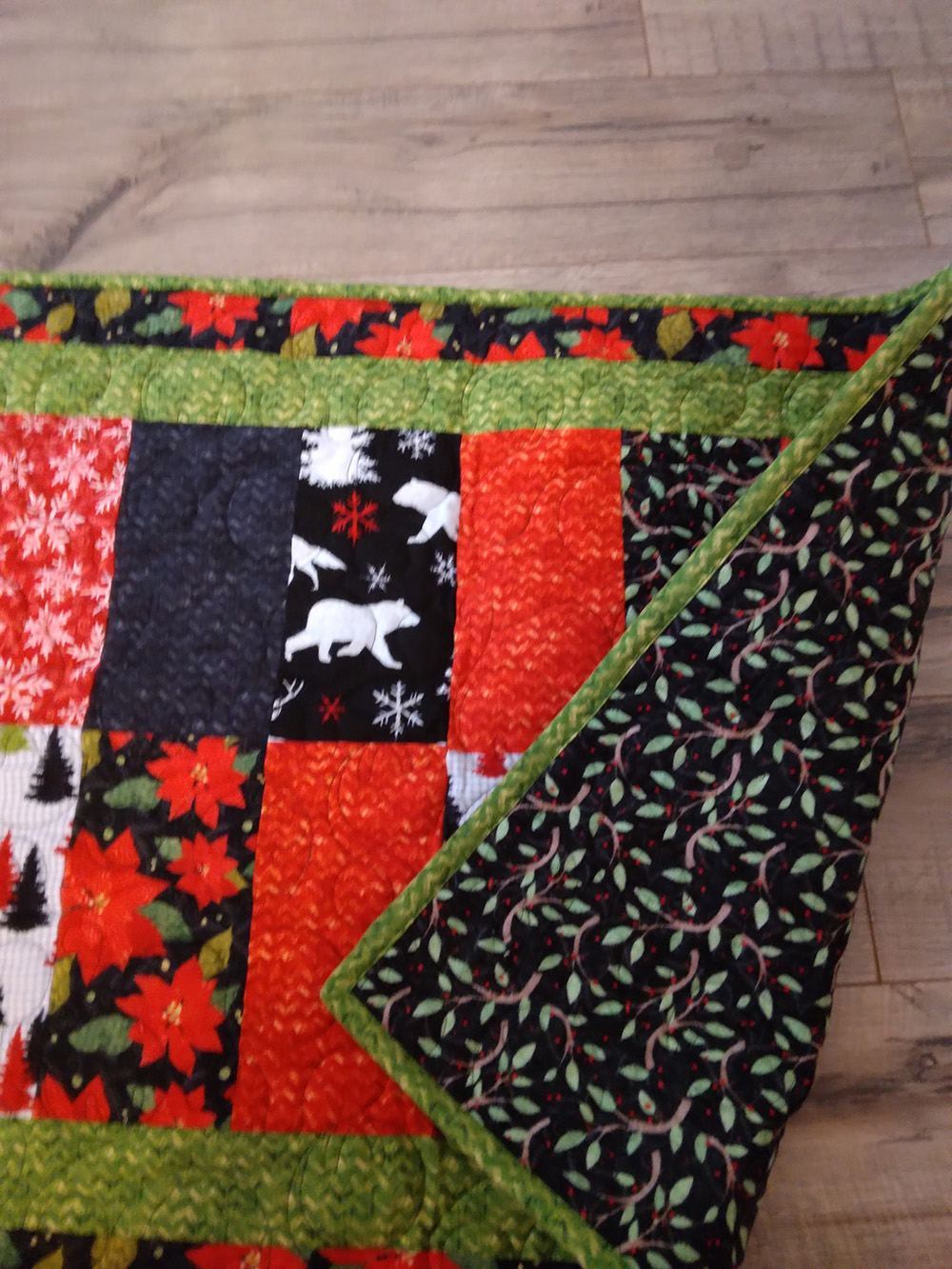