One of the biggest problems we faced when we started using our ScanNCut was trying to get a perfect cut. This is understandable since there are many factors to consider like blade depth, blade quality, pressure setting, cut speed, and even the quality of the mat that can affect the cut. 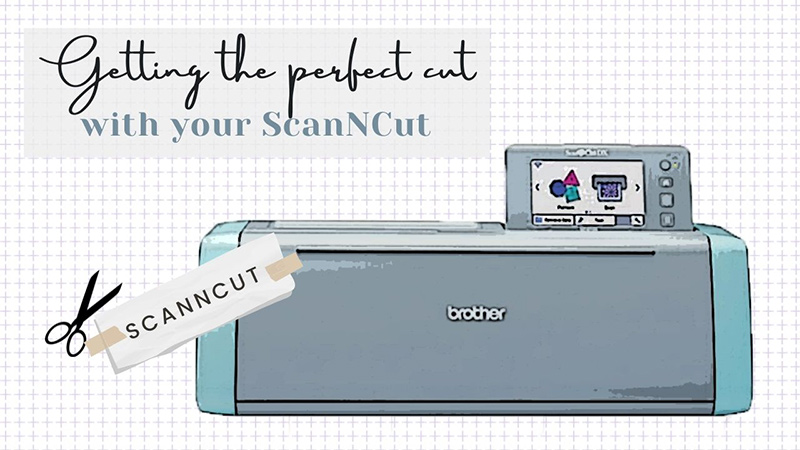 It can be tricky when you first start out, so much so that you may even cut through your mat the first time you use it.

If you have a DX version of the ScanNCut, then you are less likely to see this problem since the machine is automated and senses how deep it should cut.

But if you have a CM machine, which is an older version, then cutting through the mat can happen. We have even done this ourselves on a couple of occasions when we have forgotten to change the blade depth on our ScanNCut 2.

TIP: If you have cut through your mat, then here’s a tip for you. Just take a piece of tape and apply it to the cut on the back of the mat. Most tape will work, just don’t choose anything too thick.

So what’s involved with getting a perfect cut?

I’ve put this one first because this is the most common cause of bad cuts. If you have been cutting successfully for quite a while and suddenly things don’t go so well, it is most likely the blade that is causing the issue. The blade will dull over time just like your scissors or rotary cutter. 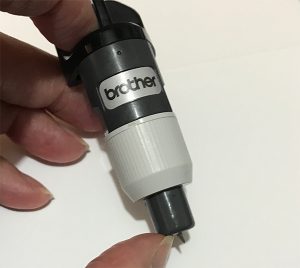 So, if you do a lot of cutting, try to have a couple of extra blades on hand at any one time. If a cut is going badly, then you can swap it out with a new blade to see if that is the issue.

We often get asked how long a blade lasts but it’s like asking how long is a piece of string. It’s almost impossible to answer as it will depend on how often you use it and what you are cutting.

We tend to cut sporadically so we might use it for a couple of hours every day for a week and then we might have two weeks where we don’t use it at all. So figuring out how often we need to replace it can be a difficult one to answer.

The beauty of the ScanNCut (and similar electronic machines) is that you don’t have to pay for those expensive dies. So really your only major costs are replacement blades and mats.

TIP: Here’s a tip that might help to get your blades to last a little longer. If you are cutting both paper and fabric then it is worth having one blade for paper and another for fabric. I think most quilters will agree that you don’t use your good fabric scissors for cutting paper. You have a separate pair for that. So this applies to the ScanNCut blades. You could even have a different blade holder for each so you don’t have to change the blades each time. All you need to do is change the holder instead.

On a DX machine, there are no numbers because you don’t need to manually change the blade depth, the machine does it for you.

So it depends on what you are cutting as to what number the blade should be set at. The thicker the paper or fabric you are using, the higher the number you should set the blade.

Examples of some of our blade settings on our CM machines:

We tend to cut the same things over and over again. They are scrapbooking paper, card stock and quilting fabric.

These are our go-to settings but if we buy a different brand of scrapbooking paper for example or a different fabric than usual, then we might do a test cut first to make sure that our blade setting still applies.

Bear in mind, that it’s not just the blade depth that can affect the cut. The blade pressure can also be a factor, so let’s take a look at that next.

The ‘cut pressure’, as the name suggests, is the amount of pressure placed on the blade as it cuts.

If you’ve ever used a craft knife to cut around a pattern, you will know that the amount of pressure placed on the blade can make a difference to the cut.

If you were manually cutting scrapbooking paper or cardstock with a craft knife, how much pressure would you place on the knife compared to say if you were cutting template plastic, felt or fabric? Intuitively, you probably know that you would place different amounts of pressure on each of these – less so for the scrapbooking paper, maybe slightly more for the cardstock but for the template plastic and fabric you would use a lot more pressure.

Examples of Some of Our Pressure Settings

We tend to not mess around too much with the Pressure setting on the DX machine we have. DX machines tend to be pretty good at automatically determining the best way to cut whatever happens to be on your mat.

However, for the ScanNCut 2 and earlier machine, we tend to leave the pressure at the default setting of zero for scrapbooking and card stock.

Where can you find the Pressure Setting?

To change the Blade Pressure you need to go to the SETTINGS section of the machine as shown in the image below.

On the left is the ScanNCut 2 (which is part of the CM series of machines ) and you can see that the Settings can be accessed by clicking the little wrench button on the front of the display panel and then you just scroll through until you see the Cut Pressure option.

On the right is the ScanNCut DX machine, and you can access the settings from the link on the screen as indicated by the arrow. You then scroll through until you see the Cut Pressure section.

The Cut Speed is the speed at which the machine will cut. It’s not often that we change the Cut Speed, but it can help in certain situations, particularly for intricate cuts.  In this case, we will usually slow down the speed.

You can access the Cut Speed from the SETTINGS section of the machine in the same way that we accessed the Cut Pressure in the image above.

You may not think that your mat could affect your cut but I have found that it can, particularly so if it has been well used.

I found this out when cutting a particular pattern. It just wasn’t cutting well at all. I cut a few shapes on that mat at the same time but this one shape just would not cut properly. It wasn’t too intricate so it should have cut cleanly. I tried it a few times by changing to a new blade and increasing the pressure thinking that might have been the issue but no luck. It was only when I moved the shape to a different part of the mat that it worked.

What I had been doing was cutting the shape over a part of the mat that had so many things cut on it over time that it was affecting the cut.

These mats can last a long time – we have some that are over two years old, but at some point, you just gotta let them go.

TIP: Here’s a final tip for this lesson. Sometimes when you are working with thicker materials you may notice that the cut has not gone all the way though. Instead of increasing the blade depth or pressure try this instead. Leave the material in place, do not move it, load the mat back into the machine and press the cut button. This is called Double Cutting. The machine will cut exactly along the same lines that were cut previously so the second cut should go all the way through the material. You do need to make absolutely certain that you don’t move the material at all, before placing it back into the machine to make the second cut.