Each of us has our own unique tale on how we learnt to sew and we would love to hear your story, so why not share a comment below.

Here is how I learnt to sew:

My mother taught me to sew when I was very young. She also taught me to knit and crochet. Typical of a lot of women of her day she was proficient in all these crafts plus she was the most amazing cook. I would come home from school to a house filled with the aroma of freshly baked loaves of bread, placed on racks on the table waiting to cool; alongside an assortment of sponge cakes, scones, and other delicious goodies. Most made on a coal range I might add. But I digress.

She had a Singer treadle machine. One of those lovely decorated machines on a table with 6 drawers. And it’s on this machine that I learned to sew. I loved that machine and would trace my finger around the designs on the drawers trying to match up the pattern, just one of those kid things I guess.

My mother’s machine was similar to the one shown below.  Every once in a while the belt would slip off the guide and it was a bit of a trial putting it back on. But I was taught that care and maintenance were all part and parcel of learning to sew. 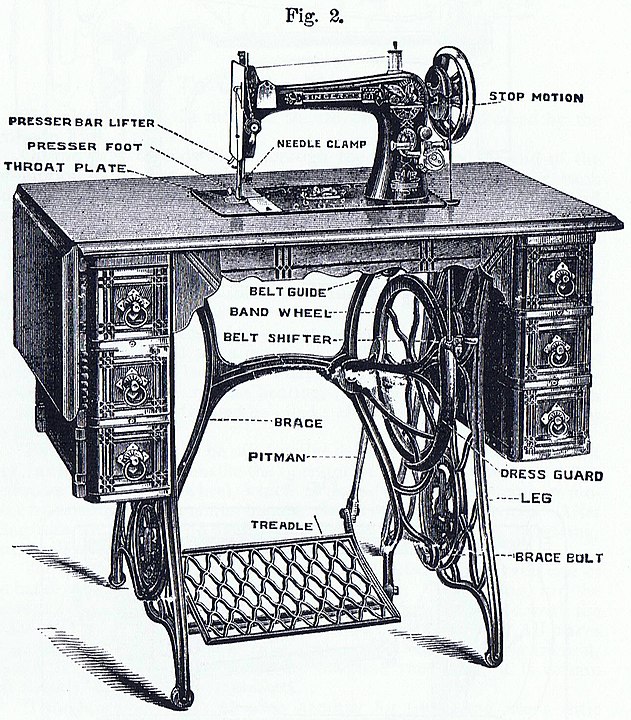 To get me started, my mother drew straight lines on heavy paper and I would sew along these lines, without any thread, just to get used to guiding the machine and keeping the perforations neatly on the line. It was also a time to learn about keeping fingers out of the way of the needle. One minor slip-up soon made sure I paid attention to what I was doing.

Once I had mastered sewing in a straight line, and around corners, I progressed to wavy lines and circles. Again, I would have to concentrate to make sure I kept the perforations from the needle, on the line. Sewing circles was a real challenge for me as I slowly guided the needle around the curved lines, but what a feeling once I mastered it.

It was a natural progression to move on to having the machine threaded, but still using paper. And finally on to fabric. I can still remember the sense of achievement I felt when I was first allowed to sew two pieces of fabric together. Keep in mind I was only about 4 or 5 at the time. I hadn’t yet started school. Under my mother’s careful guidance, it wasn’t long before I was sewing up an assortment of clothes for my dolls and teddies.

Watch the video below to see how I learnt to sew

(Can’t see the video? You may have an ad blocker installed)

When I reached high school, I found that they had electric sewing machines. Wow, how advanced. It actually took me a little time to get used to sewing on one of these machines, being used to the Singer treadle. However, it wasn’t long before I got the hang of it and was making my own clothes along with table cloths, and oven mitts.

I’m not sure they even have home economic classes at school anymore. In my day, the girls took Home Economics – cooking and sewing, and the boys took woodwork and metalwork. As I reached the end of my school years there was a bit of integration and girls and boys could take part in any of the classes. Not just the ones that had been designated for ‘boys’ only or ‘girls’ only. So we had a couple of boys in the class who liked to cook but I don’t remember any of the girls opting for woodwork. I tend to believe that the boys mainly came for the food that we would get to eat at the end of class.

When I came to Australia to live, I took a Knitwit course to learn how to sew with stretchy fabric. The family were all getting older and into wearing t-shirts and sloppy joes. I hadn’t done much sewing with stretch fabric at the time so I thought I should update my skills.

My eldest daughter, Varinia, came along with me and we found the course to be informative and we had a lovely teacher who was both skillful and very patient with everyone. It was during this course that I bought my Pfaff 1475 sewing machine, on her recommendation. At the time it was very expensive, but it turned out to be one of those purchases that I have never regretted. Thirty years later, I still have the Pfaff and it still works perfectly. I now have a Dream Machine 2 so the Pfaff doesn’t see the light of day as much as it should. Pfaff no longer produce the model that I have but they do have a range of modern sewing machines available.

Over the years I have made clothes for my family and now I am involved with creating quilting and sewing tutorials for YouTube. Quilting is such a creative way to turn fabric into gorgeous works of art that are not only decorative but practical.

So how did you get started with sewing or quilting? What inspired you? We would love to hear your stories so leave a comment below.