Just recently a limited edition Disney model of the ScanNCut DX was released, and I noticed a number of people on Brother’s Facebook page talking about upgrading their current machine to this new version. Because of this, I wanted to get in and talk about whether it is actually worth upgrading and if in fact this is really an upgrade at all. 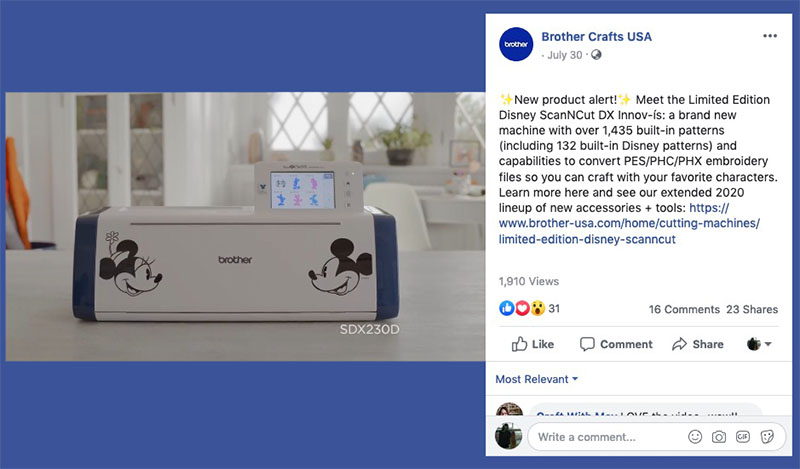 Let’s start with the differences…

I’ll be comparing this new Disney model (SDX230D) with the current top-of-the-line model which is the ScanNCut (SDX225) which comes with all the bells and whistles including the roll feeder. Note that I am working with US model numbers here and they may differ in your country.

So what are the differences? Well, from what I can tell, there are no differences between the Disney SDX230 and the SDX225, at least in terms of machine functionality. They both work exactly the same way.  Even Brother admits to this. When someone asked on the official Brother YouTube video about the ‘difference in the machine’s capabilities’ this was the response from Brother:

Brother Crafts USA: No, there are not any differences in the machines capabilities.

So what is in fact different between the two models?

The Disney ScanNCut has a number of accessories that you don’t get with the SDX225. These include the:

As you can probably tell, there is no reason to upgrade to the Disney ScanNCut SDX230 if you already have the SDX225. The only reason you might want to is if you really want those Disney cutting files and the extra included accessories. However, those ‘included accessories’ are available for purchase separately anyway and you can often find them at less than the recommended retail price. Also, Brother already sells Disney cutting files. Whether they are the same as what is inbuilt in this machine, I don’t honestly know, so it’s something you might want to check out.

On the other hand, if you have the SDX125 or any of the older ScanNCut machines and you were already thinking of upgrading to the SDX225, then you might decide to pay the extra $200 and go with the Disney SDX 230 version instead since you do get the Disney designs and the added extras.