As many of you know, we create training courses for the ScanNCut, so when a new machine is about to be released, we are right on it. The new Brother ScanNCut DX is the latest in the Brother range of ScanNCut machines with a whole host of new features that many will love. But is it all good? Let’s take a look and see.

(Note, we do not work for Brother nor are we affiliated with them in any way, so these opinions are entirely our own.)

NOTE:
Since writing this post, we have since purchased a DX machine and it is the machine we use primarily now.

Do You Live in Australia?

If you do, you will be able to purchase the machine from Echidna Sewing.

Now onto the features. 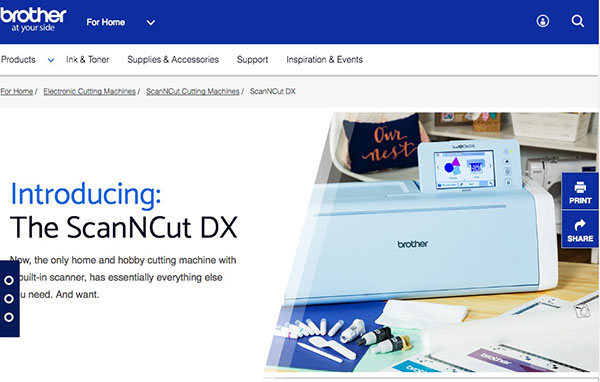 This machine looks good on paper. In fact, it looks really good. There are some amazing features that I think a lot of people are going to love.

If the Auto Blade Detection feature works as it says then it will solve 90% of the problems people have with their machines. And the Roll Feeder is a great addition for those cutting vinyl and wanting to create bigger projects.

Plus, the ability to import PES files and convert them without any hassles is going to save a heap of time for those that applique.

They’ve incorporated a lot of good features in this machine, but the proof is in the pudding. When we actually get one in our hot little hands we will let you know what we think but in the meantime, here is a list of the new features.

NOTE:
Please be aware that the features listed below are for the SDX225 USA (SDX1200 AUS) model numbers. The SDX125 USA (SDX1000 AUS) models do not have as many features. Please see our ScanNCut DX comparison post if you want to view the differences.

The most exciting addition to the new ScanNCut DX machine is the Auto Blade detection feature. If you have the ScanNCut 1 or 2, then you will know that in order to cut something you need to change the blade setting in just the right way for the particular paper, cardstock, fabric or whatever, you are going to cut.

With this new ScanNCut DX machine, you no longer need to do that. The machine senses the thickness and then adjusts the blade depth automatically for you.

The ScanNCut 1 & 2 had a maximum cutting thickness of 2mm. The new ScanNCut DX machine will cut up to 3mm.

If you’ve ever tried to scan on the ScanNCut, you’ll know that you need nice clear illustrations to get a good result and it’s often a struggle to get those good results. The new machine may make it a whole lot easier as it has up to 600 dpi as compared to the previous models which only had 300 dpi. (NOTE: I previously noted that the ScannCut DX had a DPI of 900. I did get this information from a Brother comparison chart here. However, that appears to be the only source indicating 900dpi. All other posts from Brother state that the machine has a 600dpi.)

The new ScanNCut DX  is less noisy when cutting and scanning compared to the previous models. This is a nice feature especially if you are working at night and don’t want to wake the rest of the household. It’s great for us as we won’t have to adjust the audio when editing our videos.

This is an awesome new feature! The new machine has the ability to cut up to 5.85 feet or 70.2″ in length without a mat. The maximum cutting width is 9.9″. The ability to be able to cut that length is brilliant particularly for those who cut vinyl.

The machine has a roller blade feeder function that allows you to use vinyl rolls. However, the Roll Feeder is an optional accessory which means an additional cost so keep that in mind. At this point, we have no details on the cost of this accessory.

6. Half Cut Setting for Cutting Vinyl

The half cut setting is a new feature on the ScanNCut DX. This is essentially an option for those cutting vinyl as it allows you to cut the top of the vinyl without cutting the backing.

I’d like to see this in action before making comment on this one, but if it works as it says, anyone who cuts vinyl will absolutely adore this feature.

The new machine has over 1300 in-built designs. The ScanNCut 2 has over 1100 so a couple of hundred extra designs are included.

The number of fonts is 17 on the new machine as compared to 15 on the ScanNCut 2.

I’m not 100% sure on this one, but it looks like this new machine reads PES/PHC/PHX files without the need to convert them to applique first.

I am hoping this is the case as it will make it super simple to convert part of an embroidery file to a cutting file.

From what I can tell, the Stitch Detection Mode allows you to create a file from the stitches in a PES/PHC/PHX file. Still trying to figure the exact process of this one so will add more as I find out more.

The new ScanNCut DX now has a decent storage area….FINALLY! The storage is found in the flip-out lid and looks pretty decent too. It holds quite a lot of accessories.

Watch the video below to see it in action.

The ScanNCut 2 screen is wider whereas this one appears to be more square so not sure how they are calculating the measurements.

Let us know in the comments if you are going to be getting the new ScanNCut DX. You might also want to check out our post on the comparison between the SDX125 and the SDX225 versions of the ScanNCut DX.

Watch the ScanNCut DX in action