We have been tossing around the idea of getting a Brother Dream Machine for about a year now. I mean, who wouldn’t want one of these? This is an absolutely awesome machine and the features on it are just amazing. Every now and then, we would find a video on YouTube promoting some of its features and ooh and ahh over the wonder of it all.

We really never thought that we would eventually get one, and when the opportunity arose, we took it and went and purchased a Dream Machine 2 (Innov-is XV8550D) from EchidnaClub here in Australia. We got an amazing deal as we also purchased a Baby Lock Embellisher and the complete suite of Embrilliance software. But even so, the deal for simply purchasing the Dream Machine on it’s own with Echidna is pretty awesome as you also get a Hemingworth cabinet with 300 embroidery threads, plus their P.I.E Home Training CD. And by the way, the Hemingworth cabinet is awesome. (You can read our review of the Hemingworth cabinet here.)

We were so excited when it finally arrived and we were dying to open it all up and have a play, but we wanted to record an unboxing video first. That was hard as it was like having all your presents sitting in front of you on Christmas Day but you can’t open them until after breakfast or something….aarrghh!

Anyway, we managed to get the unboxing video done and here it is. 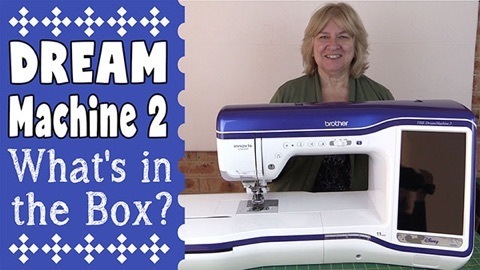