Note from Alanda Craft:  We received this lovely compliment in an email from Pat, one of our readers. After having the ego stroked, I continued to read and what she has written gave me a real chuckle. It just demonstrates what so many of us go through, being busy women who have to fit in our crafting around our schedules.  Pats bags were made using our three tea towel bag tutorial.  Plus she made mobile phone bag from the scraps, very innovative.
I do love the Aussie Theme.  Thank you, Pat, for letting us share this with our readers. 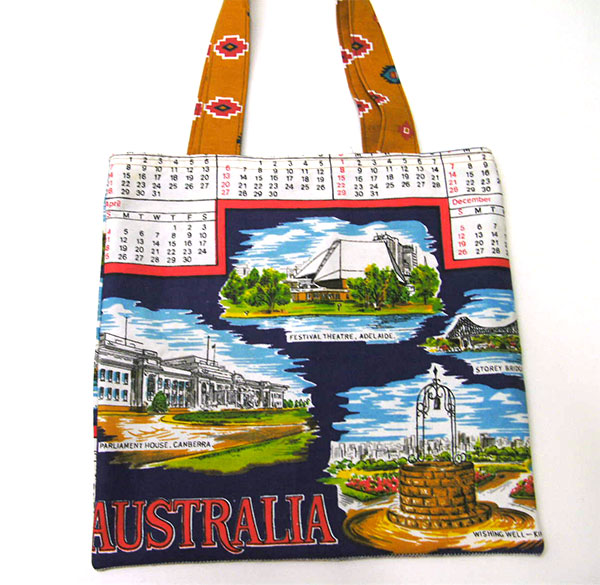 This is what Pat had to say…

Thank you for your videos. They are most instructive. I could go on forever here, but I think “most instructive” covers everything. Some videos are just plain misinformation, but yours are good, thank you.

I have made two bags using an old linen calendar tea towel for one of the sides, and a tiny bag with one long strap to carry my mobile when I am working at home while wearing clothes that do not have a pocket.

The tiny bag was made with scraps after I had made the 2nd bag and was waiting for phone calls from the other side of the country and 300 miles away and running out to the clothesline to hang out the weekend wash. 🙂

I wanted to send you the photos that I took of my 2nd bag. After the first bag, I was sick of hearing people comment that half my bag was upside down.

I wanted to use the other calendar tea towel, so I cut it in half and re-joined it so that both sides were the right way around. I did extra re-enforcing stitching across the join prior to making the bag up.
I really wanted a bag with some pockets in it to keep my glasses and mobile off the base of the bag and from being hidden under anything that I put in the bag.

This bag is not reversible as the inner fabric is not really suitable for showing off.

On Friday, received an email that my guild day, that I wasn’t going to attend, was our group’s AGM so madly ran around the house, that night, collecting bits as I hadn’t organised anything earlier. I took heaps more fabric than what I needed for the project but hadn’t had time to ‘plan’ the colours as I wasn’t using a set of coordinating tea towels to make the bag.

The only colour of the things I took that sort of went with the linen tea towel was some rectangles of fabric that were too small to use.

I pieced the bits together, cut the inner and outer to match in size. Did the AGM and came home.
{My group day sewing machine was mucking and I did a lot of reverse stitching. 🙁 }

On Sunday while I was doing the washing for the coming week, I sewed my bag up.
I used the handles that I had made for a previously abandoned project, made some pockets from part of that project and attached them off centre to the pieced blue fabric.

Then I made up the bag as per your video.

Then a phone call with a family crisis came in and I decided to make that carry bag for my mobile that I have been thinking about for some time.

I used the centre strip of fabric from the piece that I took the pockets from for the outer and the fourth piece of blue fabric for the lining. Joined the strips at an angle and made a strap long enough to wear the mobile phone across the body.

Squared up the two fabrics for the bag and stitched it up as per the “3 tea towel” method. Boy, that was one bumpy item to sew with that long handle in there.

I added 3 large press studs to keep the mobile safe while bending while doing the housework. Will replace them at a later date with a different closure as it made the bag a bit short.
That is what you get when working with scraps/off-cuts. 🙂 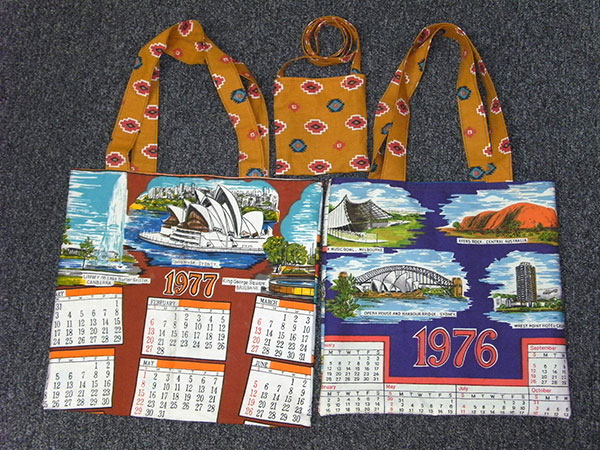 So main reason for writing is to THANK YOU for making the video on that method. I will not be using tea towels as I rarely buy ones suitable for a bag. But I will use the method for a lovely smooth finish to a carry bag. Already planning one with a zip (couldn’t find my small zips for the mobile phone bag).
Using a zip means that the bag cannot be used a reversible bag, but that is okay with me.

The Reverse Side of Pat’s Tea Towel Tote Bag 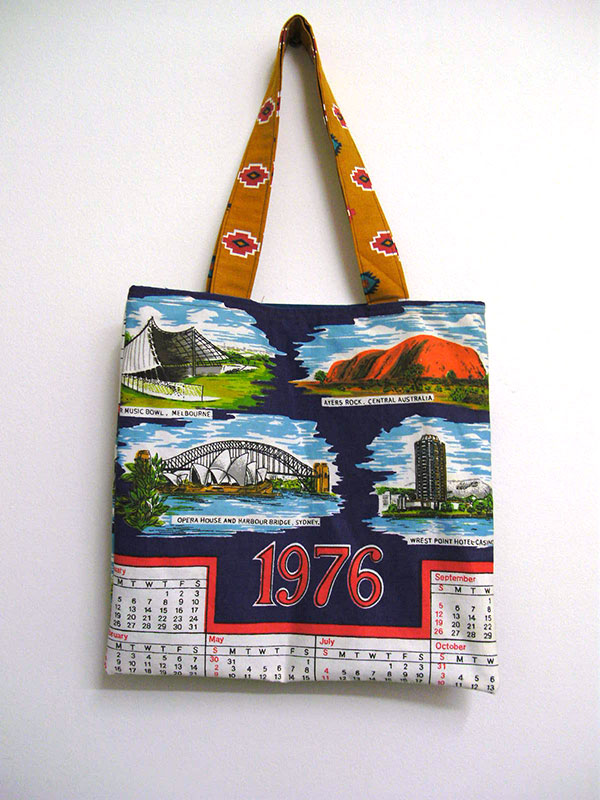 The Base of the Bag 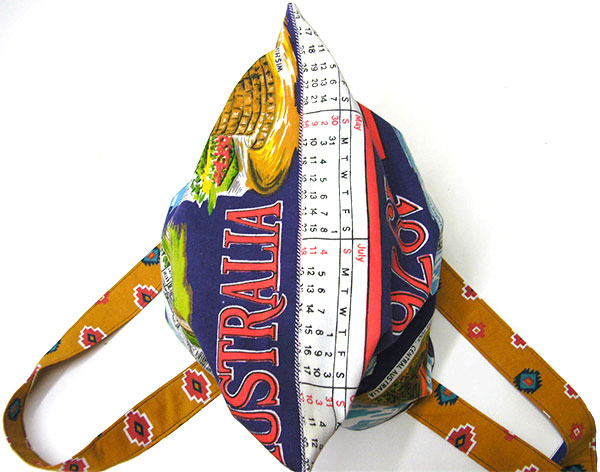 Inside of the bag 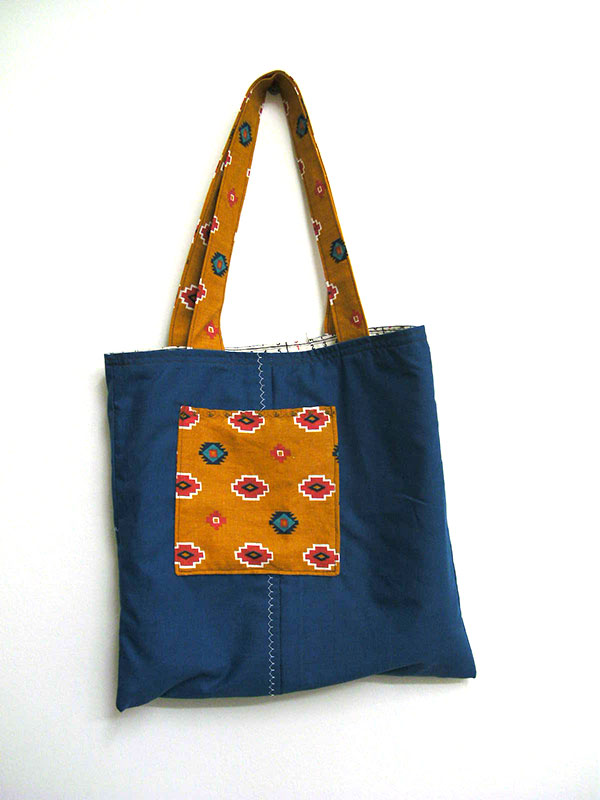 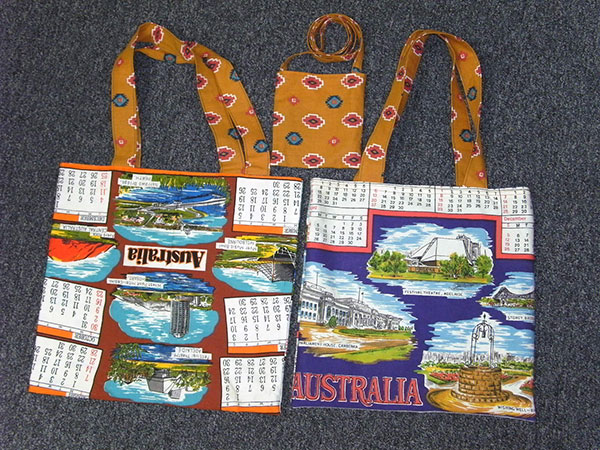 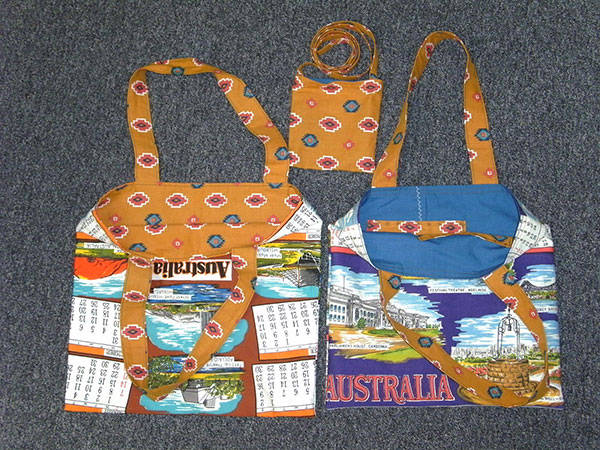